Let’s begin with this….

There we are, as reported by the Sun, a feminist vegan cafe has decided to charge men 18% more in order to combat the dreaded and woefully mythological “wage gap”. They even seat women before men by giving them “preferred seating.” 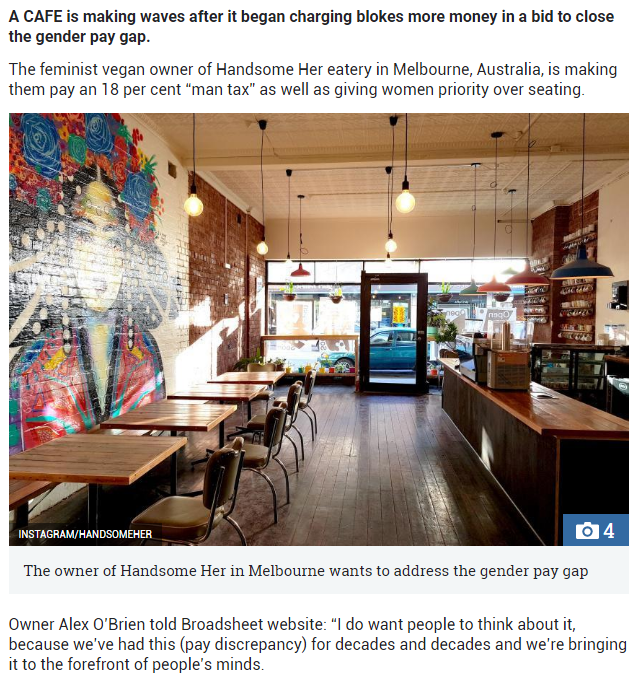 You know, like whites once had priority seating before Rosa Parks decided she didn’t want to give up her seat and ride in the back of the bus. Feminism is about equality: thus – men sit in the back and the front is reserved for women.

I double checked just to make sure, and I was right.

This feminist vegan cafe is in direct violation of the “Sex Discrimination Act 1984” which prohibits discrimination on the basis of sex for nearly all aspects of society including “provision of goods, services and facilities, accommodation”.

Not only does this cafe discriminate it’s billing practices on the basis of sex, which is provision of goods and services but it also discriminates in preferred seating for women: which is accommodations.

I do so enjoy aiding the local constabulary mind you, I may not be a citizen of Australia but I consider myself a citizen of the world: I’m always willing to lend a helping hand.

With regards to discriminating on the amount of money charged: this is a clear violation of the Sex Discrimination Act 1984 Article 22 1.B & C

1. It is unlawful for a person who, whether for payment or not, provides goods or services, or makes facilities available, to discriminate against another person on the ground of the other person’s sex, sexual orientation, gender identity, intersex status, marital or relationship status, pregnancy or potential pregnancy, or breastfeeding:

With regards to discriminating on the preferred seating of women: this is a clear violation of the Sex Discrimination Act 1984 Article 23 1.C

(1) It is unlawful for a person, whether as principal or agent, to discriminate against another person on the ground of the other person’s sex, sexual orientation, gender identity, intersex status, marital or relationship status, pregnancy or potential pregnancy, or breastfeeding:

In their quest to combat muh wage gap, a ridiculously broken narrative based on no credible evidence other than statistical dishonesty. Here’s famous feminist Christina Hoff Sommers, who defines herself as an “Equity Feminist” and who some of my readers may know as “Based Mom.” Going over the details of the wage gap as studied by both public and private entities on vastly larger scales than the common feminist narratives.

Never mind all evidence to the contrary: the feminist wage gap myth is real because feminist narratives claim it’s real. So in the quest to vanquish the non-existent myth: Feminists are quite willing to violate very real federal laws. Even if those laws, were in fact lobbied for and advocated for by Feminists.

The Sex Discrimination Act 1984 implements Australia’s obligations under the United Nation’s Convention on the Elimination of All Forms of Discrimination Against Women (CEDAW) which came into force in September 1981 and which Australia ratified in July 1983.

How can they rationalize this abject violation of the law? Laws which again, were lobbied for by, advocated for by and proposed by Feminists: to end discrimination? Especially since Feminism all about muh equality?

As I have stated, a multitude of times, to believe the propaganda of feminism: without examining the actions of feminism; denotes an easily manipulated mind.

“Feminism is about equality” – Then why the single largest feminist organization in existence, the National Organization for Women, publicly state on their own website that they oppose shared parenting laws which would give men equal legal rights to that of women? (NOW’s NY branch website was taken down).

“Feminism is about equality” – Then why do feminists advocate that women not be put in prison when they commit a crime? Such as was reported on by Jezebel, The Daily Mail and the BBC?

“Feminism is about equality” – Then why did Feminists in the US make it a less legally punishable crime for a woman to rape a man than for a man to rape a woman? Also in Israel and India.

“Feminism is about equality” – Then why do Feminists advocate against False Rape accusers being tried for having falsely accused someone who was innocent of any crime? As reported by The Guardian and TIME magazine? If the accusation went all the way to trial the Accusers are guilty of filing false reports, perjury and slander.

“Feminism is about equality” – Then why do feminists protest so many men’s rights conferences, even though about male suicide when men are dying of suicide at four times the rate of women?

“Feminism is about equality” – Then why do Feminists support the Violence Against Women Act when men are the majority of assault victims, men are the majority of murder victims and in the arena of domestic violence: even Jezebel couldn’t find fault with a study which showed that women perpetrate domestic violence more than twice as often as men? Not only did they not find fault with it: they laughed at the fact that most of their fellow feminist staff members had in fact committed domestic violence in spite of not having been on the receiving end.

“Feminism is about equality” – Then why did feminists create and lobby for the Duluth Model which has been proven in several studies to be nothing more than a gender based discrimination which is used to arrest male victims of domestic violence at 3 and 5 times the rate at which women get arrested in duel arrests for domestic violence?

“Feminism is about equality” – Then why did Feminists lobby for “Yes means Yes” / “Enthusiastic Consent” to be made the standard ruling on college campuses which denies the accused any rights of an actual trial and has been shown to be so blatantly one sided that even when the co-author of the law was asked how one could prove one’s self innocent after being accused: she responded by saying “Your guess is as good as mine.”

“Feminism is about equality” – Then why does women’s forms of cancer receive 4 times as much government funding as men’s cancers even though men die of cancer more often?

“Feminism is about equality” – Then why did Feminists make Female Genital Mutilation illegal, at the federal level but not male genital mutilation illegal even though (1) an avg of 112 male children die every year in the US from routine infant circumcision and (2) it’s in violation of the 14th amendmentwhich states “No state shall make or enforce any law which shall abridge the privileges or immunities of citizens of the United States; nor shall any state deprive any person of life, liberty, or property, without due process of law; nor deny to any person within its jurisdiction the equal protection of the laws.”

With all of the equality, where’s the equality? Not seeing much equality, but I am seeing double standards in every law that feminists support. Including double standards so outright and egregious that they’re purely in violation of the 14th amendment to the constitution like the Federal Prohibition of Female Genital Mutilation Act of 1995 and the Violence Against Women act.

I also find it more than a little hysterical that it would be Feminists who lobby for laws which violate the constitutional amendment which was written in order to protect blacks from the various “black codes” which former slave territories used to oppress them. Yeah, “equality”, men just need to be protected by the 14th amendment to prevent them from being exploited and denied equal rights against the Feminist “male codes.”

Again, to be taken in by the rhetoric of feminism “muh equality” while paying absolutely no attention to the reality of feminism: is either an act of doublethink or extreme naivety.

“If your ideology is in conflict with Reality – it is not Reality which is wrong.”

Here’s the kicker: for everything I laid out above, there’s ample rationalizations to justify them. this is why I created the logical fallacy “Ad Minus Aequius”. 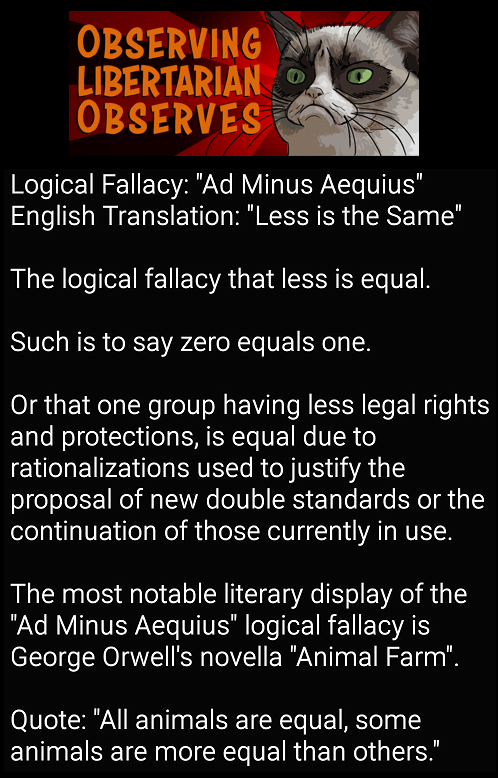 “I’ll give you a practical example; me, being a classical liberal, a strict constitutionalist – am a centrist. Here’s the banner which adorns my twitter, minds and youtube pages.

A full throttle no holds bared statement that all people regardless of any identity of any kind should be treated equally under the law with no special treatment of any kind be it negative or positive.

No second class citizens, no special privileges, no special protections. Everyone treated equally before the law and their individual rights / civil liberties protected BY the law: against the malevolence of others or even against the state itself.

It doesn’t GET any more classical liberal than this. This is the essence of the greatest political and moral philosophers of western civilization boiled down into a single opus that the rights of the individual are sacrosanct and everyone within society should be protected or punished equally by the same code of law.”

I publish verifiably factual information which dispels popular mythos and propagandic narratives as a direct confrontation to those who wish to use rhetoric to deny the rights of others.

What I advocate for, is exactly what you see in the quote for my article “Political Abandonment“, equal rights.

If you’re advocating for or lobbying for superior rights to be given to a group or groups OVER THAT of another group or groups: you are categorically, unabashedly and undeniably, by definition, a supremacist.

It’s a simple concept really and it goes utterly unnoticed. 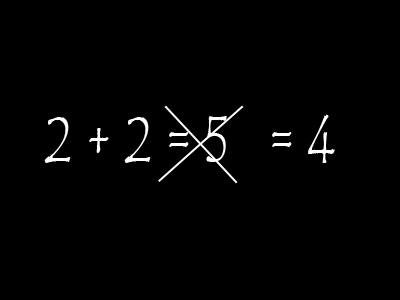 I am a Humanist small L libertarian Deontological Minarchist. In that order - As a result of this philosophy: I cannot in good conscience condone the actions of any group, movement or organization which seeks to oppress another individuals human rights. By education I have an Associates of Occupational Studies in Gunsmithing, and am qualified to testify in Open Court on the State's behalf as a Firearms expert. I am also an NRA Certified Firearm Instructor. I am currently in the Process of writing two books on Philosophy View all posts by Observing Libertarian

One thought on “Some Animals Are More Equal”